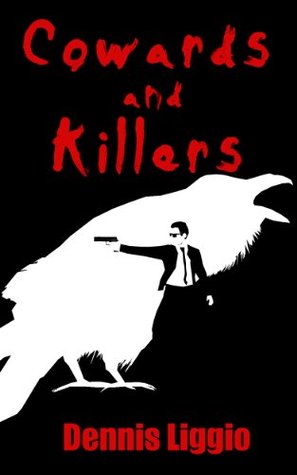 Note: I received a free copy of Cowards and Killers in exchange for an honest review.

Michael has died, but a mysterious voice on the phone has kept him in the world. They have a simple deal for him: kill and they’ll stop his soul from going to Hell. In a suit that conceals his identity and with a black gun that never runs out of bullets, he becomes their agent. He doesn’t want to be their assassin, but he has no choice if he wants to survive. However, he is not alone in this trap; other agents are trapped in this same dilemma. They all receive calls and must kill their targets before the timer winds down. Together with another agent, he plots to rebel against the voice. But can they really do much against their fate when the voice holds all the cards? With each kill, their humanity is slipping away. Is there a way to escape this dilemma, or do all roads lead to Hell?

I liked Cowards and Killers. I was compelled to keep reading and annoyed at my general sleepiness (recall: I’m pregnant) when trying to get through the ending the night I finished it. Enough of a mystery exist around the origin of the Voice on the phone and the killings that I wanted to keep reading, to unravel the mystery, to understand what was happening.

The problem was that this book was a little long. I think it would have been better as a longer short story or maybe short novella. Intriguing ideas bound the book together, but the actual story-telling left something to be desired.

The beginning was linear without much weaving of plot threads. Much of the middle was talking, explanation, discussion of which agents could be trusted and who couldn’t. The climax was explosive and satisfying, the ending intriguing, but the wrap-up left something to be desired. The explanation we receive on who is doing the killers and who is orchestrating the events at the end is 80% complete, but there are holes. The “big reveal” at the end as to Michael’s history and previous life left me scratching my head, since I never clued in throughout the book that we needed a big reveal. Even the mysterious informational benefactor that appears in the last 25% is left as a deus ex machina to pull together bits of the plot but not ever give a full explanation (although it’s completely obvious from his name as to who he is and what faction he represents).

I have a lot of complaints, it seems, but I still liked the book. As I said, the ideas are strong and unique, but I feel that Mr. Liggio needs to work on his storytelling. Bring the exciting parts on camera rather than telling us about them, get multiple plotlines going at once, and ensure that each bread crumb being dropped gives us a tad more than the last bread crumb. If you like heaven/hell urban fantasies, you’ll probably like this one.