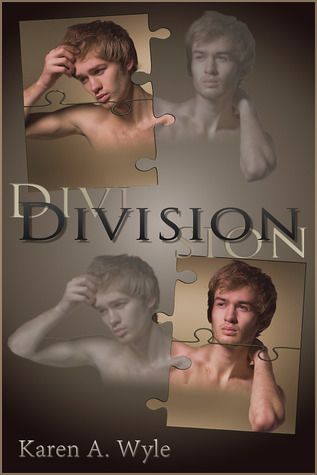 Note: I received a free copy of Division in exchange for an honest review.

Conjoined twins Gordon and Johnny have never let their condition keep them from living full and fulfilling lives. Gordon looks forward to many years of closeness and cooperation. Johnny, however, faces their future with increasing restlessness, even dread.

When the boys are in their teens, the new technologies of accelerated human cloning and brain transplants are combined into a single medical procedure — Transplant to Clone, or TTC. Someone whose body has suffered such extensive damage as to make normal life impossible may — with court approval — be cloned and then given a brain transplant into the clone body. With Gordon’s unwitting assistance, Johnny realizes that the TTC procedure provides the chance he had never dared to hope for — the chance to live in a “normal,” separate body.

But Gordon considers their conjoined life a blessing, rather than a curse. He has no intention of accepting separation — not without a fight . . .

Division is one of the best books I read in 2013, a year in which I read Parasite and We Need to Talk About Kevin. (And the Divergent trilogy, but I didn’t actually like those books, so no competition there.) I liked it so much that I asked author Karen A. Wyle to write a guest post for the blog, which she did last Friday.

This is a story about a pair of conjoined twins. One twin wants to undergo an operation to separate them into two bodies, while the other wants to stay joined. This is set in the near future, where the twins must present their arguments in court because the procedure requires the use of clones and cloning is restricted. The book follows a variety of characters as they cope with the emotional atmosphere up to and after the decision.

I get swept away by books like these that explore what it’s like living in the skin of an unusual, unexpected person. Division puts us into the experiences of a twin who want to be free, showing us what life is like chained to another person. It shows us the struggle the other twin undergoes when he’s–in his mind–rejected by someone closer than a lover could ever be. It even examines how their struggle affects their mother, who’s loved them unconditionally from birth and must watch their relationship fall apart. It follows a girlfriend who believed she would, someday soon, marry two people in one body.

A variety of moral questions are opened without direct treatment, which was skillful and impressive. Should the twins be allowed to leave their body for clones? Should a court have the responsibility to decide the future of their lives? Can there ever be a “right” answer when both of them want something mutually exclusive? Yet the morality was never heavy-handed, but was instead a backdrop for the interesting and subtle character interactions.

This book is one of the beautiful pieces of self-published literature that inspires me. The author, Karen A. Wyle, has published several other books that I’m eager to check out. Not to get on my soapbox again, but meticulous attention to detail–plot, character, premise, grammar–is what makes people want to read books. You don’t have to be traditionally published, though you may have to work your bum off twice as hard to get noticed. I heartily recommend this book.