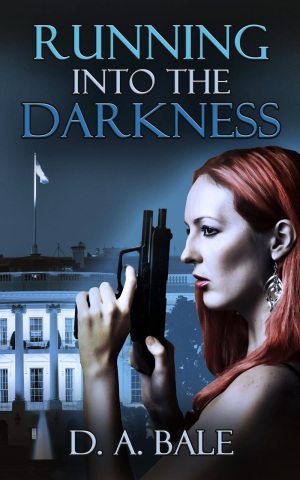 Note: I received a free copy of Running Into Darkness in exchange for an honest review.

“I never intended to kill the President. As a doctor, I swore an oath to protect life – not take it. But that was before…”

Second year resident, Dr. Samantha Bartlett, is swept from the frigid New York winter to once again confront the sting of death back home – and face those she left behind. But she’s not alone. A strange man she dubs Shades haunts her every step as she seeks answers to the inferno which claimed her grandmother, an eerie reminder of her parents’ deaths. The secrets Samantha uncovers forever changes her image of those she only thought she knew.

Confronted by Shades, Samantha joins a secret underworld known only as the Elite, where a web of power and control is woven deep within governments worldwide. Their sights are set on the power structure of the United States, and Samantha becomes the unlikely key to infiltrating the White House at its most intimate levels.

The quest for blood threatens to destroy Samantha. From the darkness there is no escape.

Running Into the Darkness is a thriller with medical advancements and tech that, as far as I’m aware, are just outside the range of what’s possible now. Then again, what do I know about what the most shady government divisions have? Probably some interesting stuff, just like the tech in the book. I guess it says something more about me than about the book to say that I wish there was a little more of that. But the story itself is about Samantha and her world getting turned upside down when her life starts to crumble around her.

I’ll get this out of way early on, since no review would be complete without mentioning the incest. For other reviewers, this was a complete turnoff. I can’t say that I liked it–I mean, ew–but it served a purpose. It showed how the main character Samantha was able to become another persona. It also opens up a question as to what constitutes incest. She never knew her father, so he wasn’t a “dad” to her. He was just another guy, one who’d done a lot of bad things, and one she wanted revenge on. I still can’t wrap my head around why the Elite would insist she go through with sleeping with him, but she is the perfect person to hate him enough to kill him.

While incest is a darker subject, I didn’t feel like the book was dark enough, especially for one with “Darkness” in the title. I didn’t quite feel Samantha’s angst with her. I understood it, but it wasn’t gritty enough for me. I saw it, from the outside, but I didn’t have much of an emotional reaction. I wasn’t there with her. I did like the book well enough, so maybe the sequel brings us into the depths of emotional despair.

If you’re looking for a thriller-like contemporary read with elements of sci-fi, you’ll like Running Into the Darkness. The sequel, Piercing the Darkness, is out, so if you hate waiting for the next installment, fear not, it’s available. The third and final book is releasing soon, so you hopefully won’t have to wait for long until it’s out.